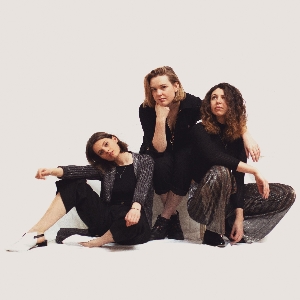 The Magpies
All UNDERTOW TOUR 2022 performances

Three accomplished musicians in their own right (and with a successful annual festival to their name), The Magpies is a combination far greater than the sum of its parts. Guitarist Bella Gaffney, banjo player Kate Griffin and fiddle-player Holly Brandon draw on their wide-ranging influences to create a unique blend of transatlantic folk. They have made a huge impact with their fresh brand of transatlantic neo-folk and have been ‘making waves wherever they play’(Phil Beer, Show of Hands).

The Magpies’ debut album – Tidings – was released in June 2020 to critical acclaim: ‘effervescent’ (The Sunday Times), ‘folk with finesse’ (The Daily Mail), ‘check that album out’ (BBC Radio 2). A rich and varied showcase of the live show, the album draws on a range of influences and delivers a sound that can only be described as contemporary, bringing a fresh and feminist voice to the current milieu.

The Undertow sees an evolution in this, hear it for the first time on this tour. This being the first date to kick things off a modern but traditional setting in the center of Leeds befitting of the event. You may be asked to sit close to those not in your party to accomodate all attendees. Set just off city square, 2 minutes walk from Leeds station, 1 minute from bus stops and numerous parking locations.