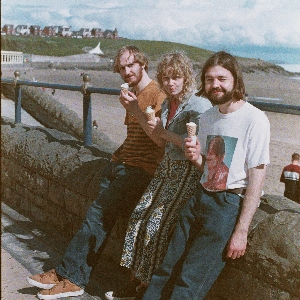 All The Bug Club performances

14+ only. 14s to 18s must be accompanied by an adult. No refunds will be given for incorrectly booked tickets.

To say that the exuberant appeal of The Bug Club’s live performances and songmanship has been spread by word of mouth is a bit of a contradiction, as you could never sum up the music produced by these three groovy peas in a far-out pod (musically and lyrically interesting, deliciously individual, stripped-back garage popsongs, which shimmy, bounce and slide from joyfully frenetic guitar riffs to melodious harmonies) in anything like one word.

Championed by Radio 6 (and Marc Riley in particular), Radio Wales and their growing, encore -insisting audiences, this three-piece p?er trio has not seen their hometown of Caldicot, South Wales in some time.
Not that they mind.

Sam, Tilly and Dan who makeup The Bug Club, couldn’t be happier as "touring is the best bit" (Sam, vocals & guitar) and it’s clear that, in announcing a new 20-date UK tour this Autumn, the band are in nohurry to slow things down.

Much better to be tearing through guitar strings and drumsticks, hanging out at the merch stand, mooching around new towns & cities andplaying stripped-back & live - as Tilly (vocals & bass) says the band love the energy of playing their songs for the first time that day on stage so the energy is there.

The venues are getting bigger (although Cardiff is still the loudest audience so far), support slots are being swapped to headlines and the audiences are singing back their songs to them (even the in-betweeny words), so it’s no surprise that Dan (drums) cannot stop grinning.

Winning hearts and minds, The Bug Club will have you clapping, cheering and singingalong with them at an independent venue in a town near you this autumn. Fun tiiiiiimes!


The Bug Club’s name does a good job of introducing the band and their music: a tight-knit, collaborative effort focussed on telling tales of the everyday that we often take for granted, shot through with humour and riffs-a-plenty. Comprising the creative trio of Sam Willmett (guitar/vocals), Tilly Harris (bass/vocals) & Dan Matthew (drums), The Bug Club formed in 2016 in the little-known rock n' roll hotbed that is Caldicot, Monmouthshire. The band were picked up by Bingo Records and released their first single 'We Don’t Need Room For Lovin’ in Feb 2021. The announcement of the EP Launching Moondream One followed.

In Nov 21 the band released the 'Pure Particles' EP including the singles 'The Fixer' and 'My Baby Loves Rock & Roll Music'. So far in 2022 the band have offered the multi-song track 'Intelectuals' and the Two Beauties release featuring 'Lay Down Your Roses' and 'Pretty As A Dog In The Light'. The second half of 2022 will bring us the debut album and more!!!