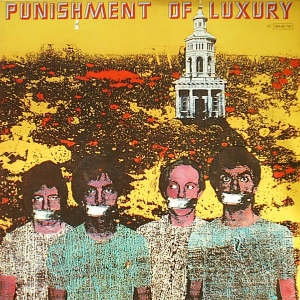 Punishment of Luxury Ed Banger & The Nosebleeds The Bricks

All Punishment Of Luxury performances

14+ only. 14s to 15s must be accompanied by an adult. No refunds will be given for incorrectly booked tickets.

From a background working in English fringe theatre groups, Punishment Of Luxury formed in December of 1976, in Newcastle. Taking their name from an 1891 painting by Giovanni Segantini in the Walker Art Gallery, Liverpool, the band released a single, "Puppet Life" on the Small Wonder label in July 1978. In 1979 they signed to United Artists and released the singles "Engine Of Excess" ,"Secrets", and the album Laughing Academy. In the summer of 1979 they played at the Reading Rock Festival after The Cure and before The Tourists and Motörhead. 1980 saw the release of the single "Laughing Academy". An extensive European tour followed.
In 2007, they reunited and played a few songs for the bassist Jimi Giro's 50th birthday party. A little more than a year later they landed a gig at a small pub in Gateshead, in the north-east of England called The Three Tuns. The gig was considered a success and was written about in The Guardian newspaper. Unlike many bands from this time going through the motions Punilux have performed only intermittently since and so these shows are something special.
Original 1977 Wythenshawe punksters Ed Banger and the Nosebleeds don't play live very often these days, so catch em while you still can.. Edweena Banger (Ed Banger/Ed Garrity) who is also the singer/co songwriter for Slaughter Bite Back is raring to go following last years SOLD OUT Bite Back Manchester reunion show, and the recent Rebellion festival announcement that Slaughter Bite Back will be appearing in 2022.
Invigorated Edweena has put together the Nosebleeds for select shows. The band will be playing a set of Nosebleeds classics, solo tunes like 'Kinnel Tommy' & Slaughter 2 material. The band also features original Slaughter & the Dogs drummer Brian "Mad Muffet" Grantham!