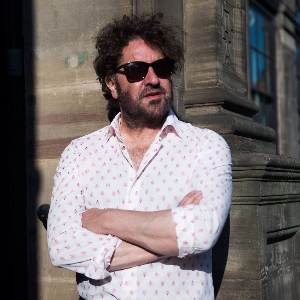 14+ only. 14s to 18s must be accompanied by an adult. No refunds will be given for incorrectly booked tickets.

Ian Prowse was special guest on Elvis Costello & The Imposters Just Trust UK 2020 Tour consisting of 13 dates across the United Kingdom including London Hammersmith Apollo, The story of Ian Prowse a career retrospective album was released on February 28th 2020 to coincide with the tour.

2016
Ian spent the years of 2016 to 2018 touring and re releasing his first two Pele (English band) albums Fireworks & The Sport of Kings.
2015
Prowse released his second solo album Companeros in 2015, the project rediscovered long lost songs from the British Isles.
2012

April 2012
saw the release of the career spanning Does This Train Stop On Merseyside: The Very Best Of Ian Prowse. Prowse and former Style Council drummer Steve White released a version of Bruce Springsteen song “Rosalita” in 2013, for the ‘Check ’em Lads’ testicular cancer charity. Prowse has a young daughter named after the song. He released his first solo album, Who Loves Ya Baby? in March 2014 initially via PledgeMusic and then IRL Records.

2009
“Does This Train Stop on Merseyside” regularly elicited an emotional response from Radio 1 DJ John Peel. Peel’s widow Sheila Ravenscroft went on the station after the DJ’s death and confirmed that ‘He was not capable of playing it without crying’. The song itself got a further lease of life in 2009 as one of the centre pieces of Christy Moore’s album Listen, which spent five weeks at the top spot in his home country.

Prowse also graduated with a BA (Hons) History Degree in 2009 and completed a master’s degree in Irish Studies in 2010 at the University of Liverpool. His Masters thesis was entitled ‘Locating the Role of Christy Moore in Irish Folk and Traditional Music’.

2008
The band then signed to The Stranglers management company and released their next album Arm in Arm on CIA Recordings in 2008.
1999
Prowse went on to form Amsterdam in 1999 with former Blow Monkeys drummer Tony Kiley and cousin Johnny Barlow. It was not until September 2004 that the band managed to secure a record deal in the form of London-based Beat Crazy. They released one album The Journey in February 2005 and three singles, “The Journey” (which hit number 32 in the UK Singles Chart) and “Does This Train Stop on Merseyside” also hit the lower reaches of the chart. The partnership was dissolved by mutual consent in 2006.
1989
Prowse grew up in Little Sutton, a suburb of Ellesmere Port, Cheshire where he attended Sutton Comprehensive School. Having performed in school bands When in Rome and Joseph Groome Towers, Prowse formed Pele (English band) in 1989 along with Dally (drums), Robbo (Hammond), Nico (violin) and Jim McCallister (bass). Signed by Michael Levy, Baron Levy in March 1991 to Polydor/M&G Records, the band went on to release two studio albums (Fireworks & The Sport Of Kings), one live album and six singles. Pele’s singles never reached the Top 40 in the UK Singles Chart, with it being often remarked that Pele sold more of their famous primary colour T-shirts than they did records. However they scored a number one single in South Africa with “Megalomania”, and had other hits in Holland, Portugal and Belgium. After nine tours of the UK, including those with Del Amitri and The Pogues, they split in 1996 due to problems with the record company whose efforts to make Prowse record as a solo artist were resisted by the singer. Prowse celebrated the 25th anniversary of first album Fireworks with a UK tour in the early 2017 with a 25th anniversary of The Sport of Kings tour announced for 2018.
1964

Ian Prowse (born 10 January 1964) is an English singer-songwriter, currently frontman of Amsterdam and previously of Pele.

During this time, the band struck up a friendship with Elvis Costello who used them as his backing band on the Jonathan Ross television show as well as support act on several occasions. Prowse also performed a duet with Costello for EMI Records with a cover of The Searchers’ 1964 hit “Don’t Throw Your Love Away” for the Liverpool Number Ones Project in 2008. He also picked up a musical icon award on Costello’s behalf at Liverpool’s Titanic Hotel in November 2014.